May Meet In Mutual, Park Centre, Baxter Park, Dundee, August 2014
Exhibition of site-responsive work by Sogol Mabadi, Emma Reid, and Craig Thomson.
Curated by MMIM (Emma Reid & Katie Reid)
With thanks to Maryfield Regeneration Team and the Friends of Baxter Park.
Supported by the Kirsten Scott Memorial Trust and IdeasTap. 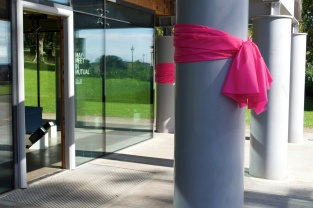 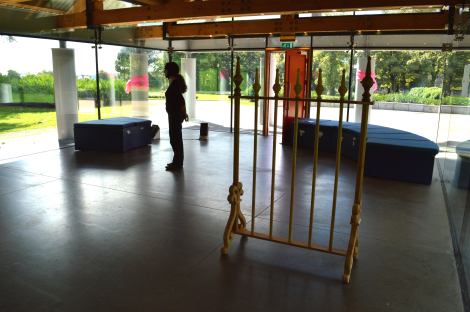 May Meet In Mutual was an exhibition of newly developed sculptural and performance work by Sogol Mabadi, Emma Reid, and Craig Thomson. The artists were invited to make new work in response to the Park Centre, Baxter Park, Dundee for this project which seeks to explore the potentials and complexities of site-responsive practice. Throughout the work we may notice a common interest in boundaries, edges, or the in between, as well as how these affect peoples’ interactions.

Mabadi’s sensitive work explores intimacy through a directness of the experience with the audience. Her work often generates a sense of being at once near the edge of something whilst becoming a part of a shared meeting place. Reid is also interested in relations between people and investigates these through the notion of playfulness or performativity that is often present in our being in the world. Through clever positioning of live-feed cameras and monitors, combined with use of the Park Ranger Centre’s ground to ceiling glass windows, Reid takes the visitor to a place of inquiry whereby their watching, acting and manoeuvring of the space is distorted and revealed to them. Thomson’s sculpture underplays the power of the wrought iron fences that surround Baxter Park. Transposed from case iron into wood and dislocated from its original, authoritarian function, the architecture sheds its austere immobility and is remade as a piece of mobile and utilitarian furniture. ‘VINCIT VERITAS’ is gifted to the Park Centre and the people of Dundee, who may use it as a coat rack, or in any other capacity they see fit.

Invitation no. 1: Greeting
These interactions will continue over the weekend. 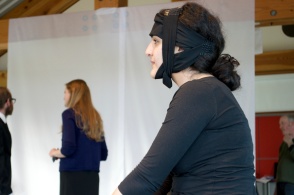 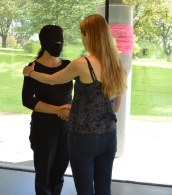 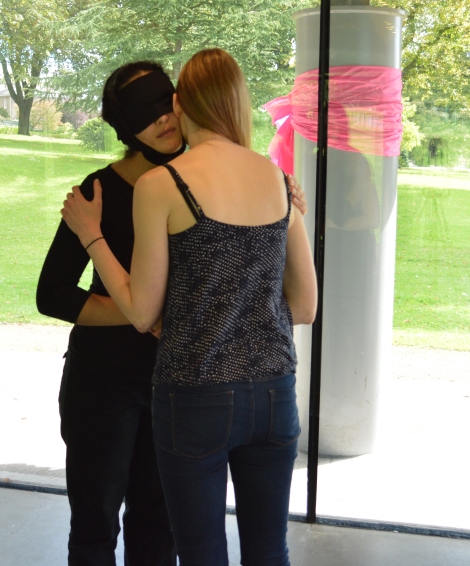 Sogol Mabadi was born in Tehran, grew up in Gothenburg, Sweden, and moved to London in 2005. She has a Foundation Diploma from Kensington & Chelsea College and a BA (Hons) from the Glasgow School of Art, graduating in 2010. With an interest in the idea of an innate ‘veil’, which does not mask but simply exists, like an encryption with a unique code of its own, Mabadi’s practice encourages and prompts the lifting of this veil. Whether it is presented to us metaphorically or literally, we lift this veil and in so doing we create a meeting place.
Recent performances and exhibtinos include: ‘Home Diversions’, Transmission Gallery, Glasgow (2014); ‘Spelling Space’, Pipe Factory, Glasgow (2014); ‘Dear Green’, ZK/U, Berlin (2014); ’24 Spaces- A Cacophony’*, Malmö Konsthall, Sweden (2013); ‘Endeavour no. 06’, Solo show, Studio 41, Glasgow (2013); ‘State of Play-10 min Manifestos’- National Galleries Edinburgh (2011). 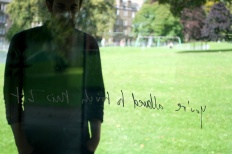 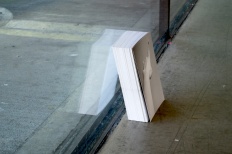 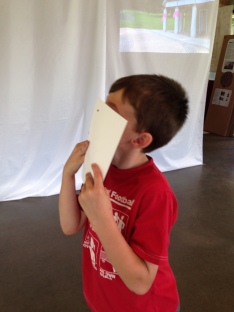 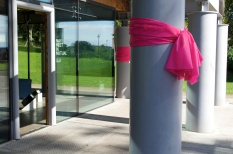 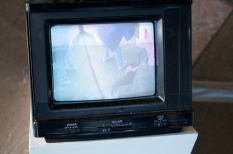 Emma Reid graduated from The Glasgow School of Art in 2012 and was awarded the SAY Award Art Commission in 2013.
Observing the subtle negotiations that occur during our daily interactions, fascinated by the boundaries a society constructs around behaviour, and viewing these moments as performances on our shared public stage become the curiosities from which Reid works.
Emma hopes to encourage your curiosity. You may find yourself adopting a performative response, and in doing so you become part of the sight for other viewers; people, watching people, watching people. Implicating the viewer in this way as a reminder that we are continuously performing ourselves.
Recent exhibitions include: ‘Please DO touch the artwork’ Art Playground, Cheltenham, (2014) ‘SAY Art Commission Shortlist Exhibition’ Intermedia Gallery, CCA, Glasgow, (2013) ‘RSA New Contemporaries Exhibition’ RSA, Edinburgh (2013) ‘Black’ RGI Kelly Gallery, (2012) ‘GSA in Dunoon’, Dunoon Burgh Hall, (2012) ‘Picture Window’, Glasgow, curated by Eileen Daily & Annie Crabtree, (2012)
More info: www.emmahelenreid.com 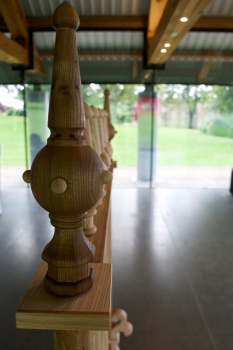 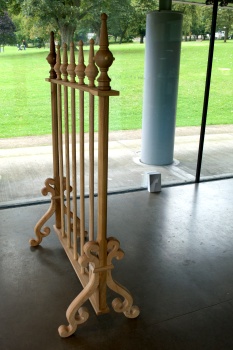 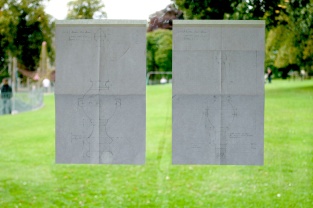 Craig Thomson graduated from Duncan of Jordanstone College of Art & Design in 2012. He is an artist, musician and writer currently living and working in Fife. He produces drawings and sculptural works that often take inspiration from his day job as a timber frame carpenter; turning this hands on experience towards an investigation into the absurd and precarious nature of human relations to materiality which underlies the everyday.
Recent exhibitions include: ‘They Had Four Years’ GENERATORprojects, Dundee, (2013) and ‘Three Conversations’, Rothes Halls, Glenrothes, (2013).

The 2014 project is co-curated by MMIM (Emma Reid & Katie Reid) and initial project development was informed through conversations with Hannah Moitt.

With thanks to Maryfield Regeneration Team and the Friends of Baxter Park.

May Meet In Mutual exhibition and events series was kindly supported by the Kirsten Scott Memorial Trust and IdeasTap.

For background information on the exhibition please see our archive pages: https://maymeetinmutual.com/archiveexhibition-and-events